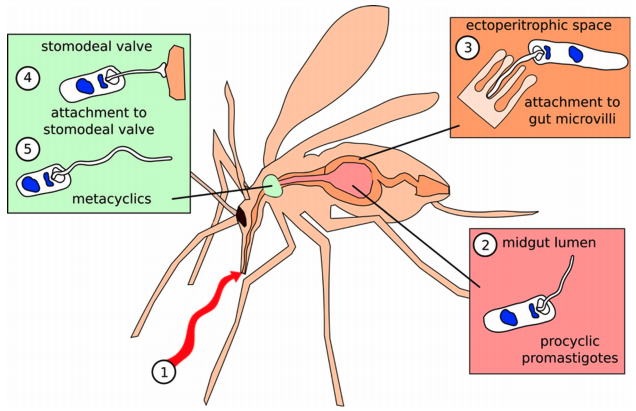 Leishmaniasis, caused by parasites of the genus Leishmania, is a disease that affects up to 8 million people worldwide. Parasites are transmitted to human and animal hosts through the bite of an infected sand fly. Novel strategies for disease control require a better understanding of the key step for transmission, namely the establishment of infection inside the fly. The aim of this work was to identify sand fly systemic transcriptomic signatures associated with Leishmania infection. We used next generation sequencing to describe the transcriptome of whole Phlebotomus papatasi sand flies when fed with blood alone (control) or with blood containing one of three trypanosomatids: Leishmania major, L. donovani and Herpetomonas muscarum, the latter being a parasite not transmitted to humans. Of the trypanosomatids studied, only L. major was able to successfully establish an infection in the host P. papatasi. However, the transcriptional signatures observed after each parasite-contaminated blood meal were not specific to success or failure of a specific infection and they did not differ from each other. The transcriptional signatures were also indistinguishable after a non-contaminated blood meal. The results imply that sand flies perceive Leishmania as just one feature of their microbiome landscape and that any strategy to tackle transmission should focus on the response towards the blood meal rather than parasite establishment. Alternatively, Leishmania could suppress host responses. These results will generate new thinking around the concept of stopping transmission by controlling the parasite inside the insect.