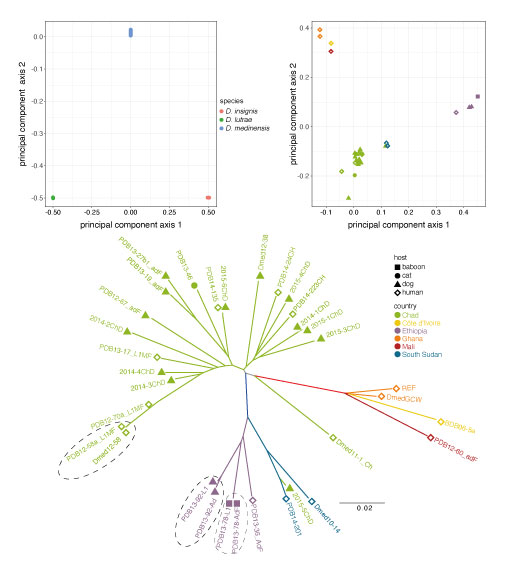 Guinea worm-Dracunculus medinensis-was historically one of the major parasites of humans and has been known since antiquity. Now, Guinea worm is on the brink of eradication, as efforts to interrupt transmission have reduced the annual burden of disease from millions of infections per year in the 1980s to only 54 human cases reported globally in 2019. Despite the enormous success of eradication efforts to date, one complication has arisen. Over the last few years, hundreds of dogs have been found infected with this previously apparently anthroponotic parasite, almost all in Chad. Moreover, the relative numbers of infections in humans and dogs suggests that dogs are currently the principal reservoir on infection and key to maintaining transmission in that country. In an effort to shed light on this peculiar epidemiology of Guinea worm in Chad, we have sequenced and compared the genomes of worms from dog, human and other animal infections. Confirming previous work with other molecular markers, we show that all of these worms are D. medinensis, and that the same population of worms are causing both infections, can confirm the suspected transmission between host species and detect signs of a population bottleneck due to the eradication efforts. The diversity of worms in Chad appears to exclude the possibility that there were no, or very few, worms present in the country during a 10-year absence of reported cases. This work reinforces the importance of adequate surveillance of both human and dog populations in the Guinea worm eradication campaign and suggests that control programs aiming to interrupt disease transmission should stay aware of the possible emergence of unusual epidemiology as pathogens approach elimination.