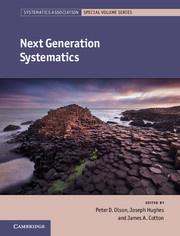 Pete Olson, Joseph Hughes and I decided to try and put together a symposium for the 2011 Systematics Association Biennial meeting, and edit an accompanying volume in the Association’s book series. We thought it would be fun. We were wrong – it was’t, but we learnt a bit, and although the book took a really long time to come out (very largely due to me moving jobs and being too busy), I’m fairly proud of it: kudos to Pete, who ended up shouldering a lot of the editorial burden during production. He’s now editor of Systematics and Biodiversity, so he must have liked it on some level! One of the fun bits was finding a cover picture - Pete also ended up finding the one we used in the end, and I thnk the finished book looks fantastic.

I don’t have a PDF of the book, and probably aren’t allowed to post if it I did, but i’ve posted above a PDF to the intro chapter that Pete and I wrote, which gives you some flavour of what is in the full volume. My other chapter – a review and introduction to phylogenetic/genomic inference methods – has a separate entry in my publications list.